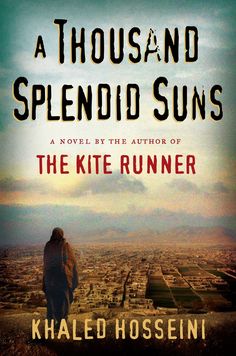 All through the book , “A Thousand Splendid Suns“, I kept going back to a so- called healthy discussion I had with somebody recently. I shared a post saying “Women suffer more in a war created by men” or something along the line( Context: Taliban taking over Afghanistan) and he was worried or even offended ( can’t account to what he was feeling at that moment) by how people would misunderstand all men and how not all men is not responsible for war. He also said -after all, it was men going to the war and getting killed, and isn’t death the ultimate pain of all?. After finishing the book, I can’t help but wonder is death the worst of all?.

It could be for some. But after reading Mariam and Laila, after living their life through Khaled Hosseini’s words, I can assure you, you won’t be able to say that without a hint of doubt. I was thrown into a dilemma, unable to choose the worst of it all. Is it your trust getting broken at the young age of 15 by your father whom you idolized, Is it losing your loved ones in a day, in the blink of an eye to bad decisions, bombings, Is it the guilt of living on, the guilt of not understanding their pain and sacrifices when they where alive, Is it being married to a man you barely know, thrice your age and being send off to a far off place where you know no one, is it the feeling of longing or the unsaid goodbyes to people you cherish the most, is it the helplessness when your husband force himself on you in the dead of the night, is it the distress you feel in your husband’s restlessness, his displeasure for not giving him a baby, Is it the endless beatings, the kicks, the jabs or the murder threats, Is it the unfamiliar scent, the alien feeling to a place, to a city you once called home, Is it the lost freedom you once enjoyed, when you could roam around looking at the blue skies without the company of a man, Is it sound of overhead missiles, muffled cries and gunshots, or people stripped, raped or brutally murdered, Is it the shame, the hopelessness, the hunger, the fear or the feeling of being lost, unwanted and unloved. I wonder what was the worst to Mariam and Laila.

The book is not just about the war, the sufferings or pain, it’s about two women finding a sense of peace, finding love and warmth in each other, finding happiness in cups of chai at nights in the front yard, It’s about sacrifices, wishing the best for each other and may be even finding the value in themselves in times of perils unimaginable.

Today, I shudder at the shallowness of the words “I feel you”. All I can account for is the feeling of unrest that I felt after reading. All I can think of is the years of waiting, the sacrifices, the war against themselves and others, the rough thorny path they had to walk for the freedom they naturally deserved. And the thought that now it is being taken away from them again -their freedom, their education, everything they have worked all their life haunts me.

For me, this book will remain one of the best reads. I listened to it in storytel. Do read or listen when you have time, Thank you :D.